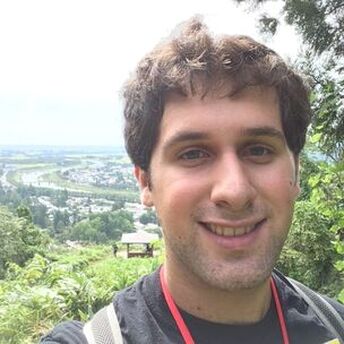 This interview of Gabe was originally published in the Summer 2020 issue of the "Open Connections Magazine".
What led you/your family to OC?
From 1st to 5th grades, I went to a Montessori school. After 5th grade I aged out, so I was faced with the prospect of going to public school, where I didn’t think I could survive. In retrospect, I probably could have done it, but at the time I was so scared—of what, I can’t really remember—and I conceived of the idea of homeschooling as an alternative. Although I’m pretty proud of myself for having the idea, that was the extent of my involvement in the process. My mom and dad did lots of research, and eventually found out about Open Connections. I don’t remember how, but they somehow found an OC promotional video, and we all got excited watching it. My sister (Sophia) and I started attending OC the same year we started homeschooling.

At what age did you start at OC? What programs were you involved in?
I began homeschooling and attending OC when I was twelve. I started in one of the Choice programs. I remember that I was in a baking choice group with CP (Cindy, former OC Facilitator) and I tried to make my own cake batter that ended up being way too salty, and I was in another choice group about ninjas. The following year, I joined Group Tutorial IV, and I would like to personally take this opportunity to apologize to Emily, (former OC Facilitator) for being very difficult to work with! Around that time, I was in a phase of my life where my greatest aspiration was to be a hermit, to live alone and to play video games all day, so I wasn’t particularly enthusiastic about going to OC twice a week. Still, I had encouragement from a lot of people (including Emily!) and made it through the two years in Group Tutorial IV. Once I moved up to the Shaping Your Life program (ages 15-18) I was ready to appreciate my time at OC more, and spent four years in the program.

What favorite memories of OC would you like to share?
Some of my favorite memories at OC are from theater productions with Lucy Tyson (OC Facilitator) that I did during Shaping Your Life. Being in that environment really helped me get better at speaking and relating to people, whether I was relating a performance to an audience or relating with my fellow actors on and offstage. One play in particular stands out: The Actor’s Nightmare, which is about some poor guy who is mistaken for an actor’s understudy and is thrown into a bunch of different scenes from a bunch of different plays, and he can’t really remember his lines. During a scene from Hamlet, I got to be Horatio and do the dramatic monologue about when he meets Hamlet’s dad’s ghost. It was basically an excuse to be as over-the-top and hammy as I possibly could, and it was really empowering to be able to do that. It was definitely a step outside of my comfort zone, but it’s one I was eager to take and one that I’m glad I took. In general, the number of different opportunities for learning at OC pushed me to try new things and have new experiences. Sometimes I loved it, and other times I felt overwhelmed, but I always learned a lot about myself through those experiences. Specifically, in The Actor’s Nightmare, I learned that I can make a fool of myself in front of a live audience and love every second of it, or in other words, that I can be an effective public speaker!

What would you have changed about OC?
It was petty, but I remember that I was very annoyed at OC’s ‘no-cursing’ policy when I was in SYL. I think part of it has to do with the fact that I wanted to be a rebellious teenager who didn’t play by the rules (except I usually did), and of course, as I’ve gotten older, I’ve realized that certain words and phrases are hateful and should never be used. But to my credit, I never wanted to use curse words to disparage others. I just wanted the freedom to be able to say them if I felt like it, like if I stubbed my toe or got a wrong answer on a math problem (which happened a lot because math isn’t my strong suit), and I needed to express my displeasure somehow.

How did OC impact you? What did you find useful?
One of the ways OC most changed me as a person was that it gave me the confidence to communicate with other people. As several Facilitators could probably tell you, I had very little of this when I started out at OC. I remember once, when I was in Shaping Your Life (or maybe Group Tutorial), there was an exercise where older youth were to facilitate younger youth in some sort of activity. That prospect scared me so much that I went to the bathroom and cried my anxiety out. Years later, I went on to give a Symposium presentation on video games as an art form, perform dramatic monologues, and lead my peers in an aikido class (aikido is a Japanese martial art that my dad and I practice). OC is a place where I was pushed to try new things, and perhaps more importantly, a place where trying new things is encouraged, and where people don’t judge you for anxiety and feelings of self-doubt in the face of new things. I think that not having a non-judgemental environment is what I feared about going to public school all those years ago, and I think having that support from peers, parents, and Facilitators at OC is part of what helped me be more comfortable with other people.

What have you been up to since graduating from OC?
Most of my time post-OC has been taken up by college. I’ve been studying at Ursinus College, a small liberal arts school in Collegeville PA, working towards a bachelor’s degree in English. I’ve also been studying Japanese, a passion of mine that I was able to pursue at OC through a Shaping Your Life Choice group about Japan. That passion culminated in my studying abroad in Japan for a year, from August of 2018 to August of 2019. I went to Akita International University, an international school in Akita, Japan. A far cry from Tokyo, Akita prefecture is one of the most rural places in Japan, so I got to experience a more traditional way of Japanese life. Some of the highlights of that year include planting and harvesting rice, seeing Mt. Fuji, and being taken by an older woman I met on the street to a prayer session for what I initially thought was some sort of cult. It turned out to be affiliated with Nichiren Buddhism, one of the largest Buddhist sects in Japan, but I remember afterwards I talked to my parents about it, terrified that I had gotten myself and my family involved in some seedy religious group. I still have the prayer book and beads the woman gave me. It was experiences like these, exhilarating ones and frightening ones, that made my study abroad really special. Currently, I’m finishing up my last semester of my senior year online due to the coronavirus, which is also an exhilarating and frightening experience!  I’m not sure what’s next for me. I hope to get into the publishing field and am currently working on my first book!
More Alumni Interviews