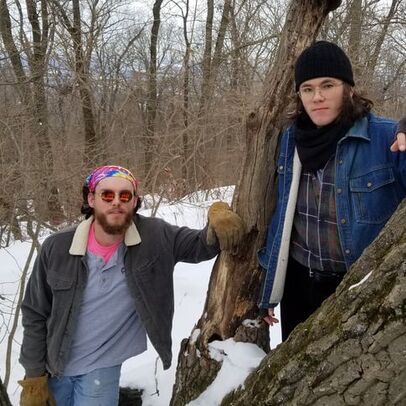 Garrett and Owen on one of their brotherly rambles.

What led your family to OC?
I spent a lot of time with the Holden family (previous OC family). Kathy Holden suggested that OC would be a good fit for me. When I was 9 years old I started attending Tuesday Tutorial II one day a week, and it all worked out!

How did OC help your effective communication skills?
The emphasis on team work at OC is extremely helpful for helping communication skills, especially the encouragement to collaborate with people you might not otherwise connect with.  The opportunities to interact with other programs in multi-group games is great too.

How did OC help you develop your creative/implementation skills?
I think that the Teen Symposium was the best way to help me learn how to implement my creative curiosities. My symposium was on why we see color, how to make that a useful part of our daily lives and how to make our lives safer (more specifically in traffic signs).  I have always been interested in color and particularly enjoy pursuing color in photography, which I was able to pursue in various OC Choice offerings. The ability to take my interest in color and turn it into a paper and a talk was pretty cool.

What favorite memories of OC would you like to share?
Woodshop with Warren (previous property manager). I learned a lot from him about using power tools.  He was calm and fairly reserved, but he was always curious. That was when I was in the Choice Program. Later on in my OC journey, I really enjoyed being an intern with Chris McNichol. I will always remember working with Chris and his palpable, fun energy to get things done. Another memory that stands out is the Logic and Probability Choice with Rick Sleutaris.

I will also always remember working with and experimenting with Sue Wenger, and her encouragement and willingness to try things out even if she knew they weren't going to work the way that I wanted them to.

How did OC impact you?
I feel like I learn things faster because of how I am naturally curious. OC’s encouragement to pursue your natural curiosity is a big part of learning.

What have you been up to since graduating from OC?
Right after I graduated in 2013, I set out to fulfill a dream I had had since I was 12, which was to travel around the country.  I worked that summer and into the winter and then traveled for about six months.  I lived out of an old FBI surveillance van which I named “Gromblewompus.”  I drove all over the country, visiting many, many national parks.  After I returned, I started working full time for an electrician, for whom I had worked some in previous summers.  I have been working for them ever since.  I have done high-end lighting infrastructure, fiber optic work, commercial electric distribution, data infrastructure, emergency backup systems and many others.  Basically, if it has a wire, I have worked with it.

If OC was destroyed in a freak calamity, what one OC principle would you save?
The freedom to learn and create.  It’s like THE OC principle.  You HAVE to keep exploration alive, it’s what makes us human.

Describe OC in your own words.
OC is a thoughtful place, with lots of freedom of expression and creativity, warm and welcoming, very helpful and just a wonderful, joyful place that I always look forward to going to.
More Alumni Interviews