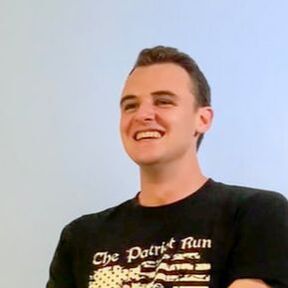 What led you/your family to OC?
My parents were already interested in the idea of unschooling/homeschooling and we had extended family who were already involved with Open Connections. Once it came time to start my  education and my parents had seen the campus and met everyone involved, it was an easy choice.

At what age did you start at OC? What programs were you involved in?
I started at four years old. And I was in every program from Open Program to Shaping Your Life.

What have you been up to since leaving/graduating from OC?
After I graduated from OC, I continued working at a private country club where I had started caddying when I was 13. After I saved enough money, I took a month-long trip with one of my best friends to Europe where we lived out of backpacks and stayed with friends-of-friends and in hostels. After I got back, I took a management job at that same country club. I later left the country club for a warehouse manager position at a veterinary supply company and simultaneously started my own auto detailing business on the side. Along the way I have been taking community college classes online. In the future, I’m looking to go into the military, law enforcement or both.

How did OC impact you? What did you find useful?
The numerous ways that OC has impacted me and has continued to guide me through life after graduation, would probably be far too long to fit into a single OC Magazine. But generally, I think that the teamwork and problem-solving emphasis have assisted me greatly in my professional life. Learning to do presentations (Peer Facilitations and Symposium) and getting exposure to researching, creating, and presenting to an audience has helped me feel comfortable around groups of people.

How did OC hone your Self-Understanding?
The thing is, I essentially grew up at OC. It helped me hone my self-understanding in so many ways. I learned what kind of people I like to fill my time with, what I like to do, and how I like to feel and not feel about myself.

How did OC help you grow your Effective Communication skills?
I pride myself in being a good communicator. I like talking to people and hearing what they have to say. I think the interpersonal interaction I got at OC is second to none. Getting to meet people from all different walks of life was important and I feel that I learned how to not just talk, but to truly communicate.

How did OC help you develop your Creative/ Implementation Skills?
In group projects you need to figure out a strategy and get the team working together to implement that strategy. In symposiums/ presentations you need to come up with ideas and a vision of how things will look and sound, and then implement that. I think OC greatly helped me with implementation skills by making me aware of how to set a goal and implement changes to achieve those. As far as creativity, OC says the “freedom to learn and create.” I think that is the perfect way to describe my experience. With the freedom to honestly create anything you were curious about, I was able to learn more about what I am actually interested in.

If you had not gone to OC, imagine how you might be different?
I may have never met the friends I have now, I wouldn’t have had facilitators who helped influence me in positive ways throughout my education, and I wouldn’t have had the freedom in my education and the opportunity to use my imagination to get involved with things that interest me. Also, I don’t think I’d have developed the ability to find out who I am and what drives me at a young age.

What favorite memory of OC would you like to share?
My graduation. Not only did it bring a great feeling of pride and achievement to my family and myself, but my dad had not been to many OC functions. After my graduation, he said that not only was it the best graduation he had ever seen, but it solidified the decision to send me to OC and he believed that they had made the right choice.
More Alumni Interviews